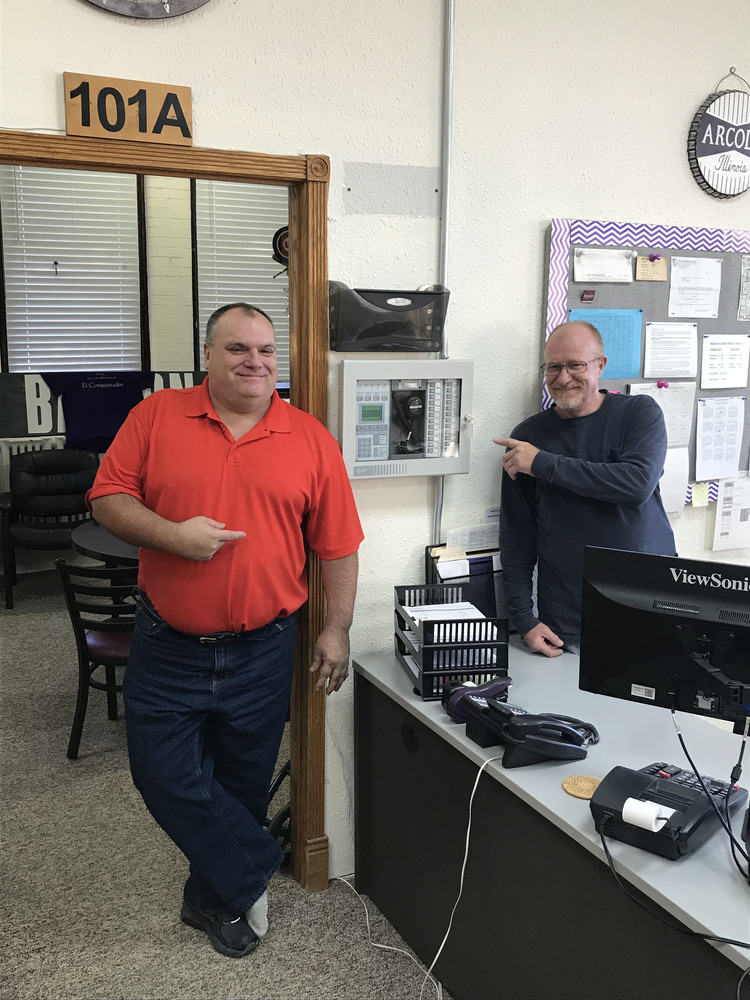 Two events last school year caused great concern for Arcola School District personnel.  First, the district’s fire alarm system began to falter during the 3rd quarter of the school year.  The district actually had three separate (and old) fire alarm systems (the 1917 high school, the elementary school, and the 2003 high school addition) that had been pieced together to make one district-wide system. The systems were certainly outdated and lacked up-to-date features but now, the custodial staff members were beginning to lose faith in its ability to function consistently if needed.  Second, as the district began doing more and more active intruder drills, the biggest area of concern brought forth following the drills was that people struggled to hear announcements/alarms over the district’s mass communication system.  The mass communication system (what us old timers call the intercom system) was also outdated and maintenance staff could no longer get parts to make repairs.

When district superintendent, Tom Mulligan, informed the Arcola School Board of Education of his concerns, the board’s response was simple.  We need these problems resolved immediately!  Student safety is the number one concern for the board. Having a fire alarm system everyone can trust and having the ability to communicate in a crisis are both directly related to student safety.

Superintendent Mulligan, along with Building and Grounds Director Ken Vogt, began researching solutions. Unfortunately, having an outside company come in and install a whole new fire alarm/mass communication system was going to cost the district several hundred thousand dollars and probably would not move quickly.  During a school board building committee meeting, Ken Vogt proposed an alternative solution. He proposed the district: (1) hire an engineer to design a brand new fire alarm system; (2) have the design certified by an architect; (3) purchase the equipment directly from a supplier; (4) have our maintenance staff run all the wiring and install all the equipment; and (5) have the supplier (the district used Thompson Electronics Co.) come in to make the final connections and certify the new system as operational!  If it wasn’t for Ken’s proven track record, the committee would have probably told him to get lost!  They would have told him it wasn’t possible to do this project in-house, let alone to do it in-house and get it done (in working order) before the start of the next school year.  But because of a track record of success, the building and grounds committee made the recommendation that the system be installed in-house to the full board and the project was soon underway!

Ken Vogt, Reuben Rowe (head of maintenance) and key custodians Tony Snyder and Paul Murphy started the project in May and the Arcola School District had a brand new, state-of-the-art fire alarm/mass communication system up and running by early August.  And the best part was the entire project came in with a price tag of only $92,666!

Heating and Air-Condition in the 1917 Building

This wasn’t the first time Ken, Reuben and crew saved the district and local taxpayers money!  Three years ago, the boiler inspector informed district personnel that the life of the old steam boilers from the 1940s (those boilers heated the 2003 high school addition and also the 1917 high school building) were on their last leg and would probably no longer pass inspection in the future.  As a result, the district began looking at solutions. They first received four proposals from contactors for fixing the problem. These solutions ranged in cost from $1,200,000 up to $2,700,000.

Because of the enormous cost, Ken Vogt began doing some research on how the maintenance staff could possibly do this project (or at least part of the project) in-house. He settled on a two phase recommendation, which he presented first to Dr. Mulligan and then to the school board building committee. The first phase was to install two new boilers that could be connected to the existing boiler system of the elementary school to be used for the 2003 school addition.  This part of the project ending up costing the district around $134,000 and was completed (by Davis Houk Mechanical) as part of a larger project that also included the renovation of the elementary all-purpose room.

The district maintenance crew began the project in March of 2017 and the project was completed before school started in August.  Phase 2 of the project cost the district around $180,000 (including the windows and roof work).  The district ended up spending around $314,000 total to provide a whole new heating solution for the 2003 high school addition and the 1917 building.  In addition, the 1917 building also received room controlled air conditioning.  Since installation, the district has also been realizing energy savings. The high efficiency boilers and Daiken units are much more energy efficient than window unit air conditioners and 1940 gas boilers!

The Arcola School District is lucky to have a maintenance crew that is both knowledgeable and willing to tackle tough projects to improve the quality of the facilities for students, while at the same time saving the district money.  As you can see from the information above on just two projects, the district was able to save well over $1,000,000 that can then be put back into improving the facilities in other ways!